Channel your inner Scarlett O’Hara in America’s most beautifully preserved colonial city. The winding cobbled streets and antebellum mansions seem of another time, a more genteel age where horse-drawn carriages had the right- of-way and mint juleps outnumbered Martinis, but this southern belle now has a cosmopolitan side to match its traditional side, as evidenced by the recent influx of cutting-edge boutiques and restaurants. Though its colonial past wasn’t always pretty (it was one of the country’s leading slave-trading centres) there has been a concerted effort of late to keep the traditions of the Gullah people (the local black population) alive through government-funded arts and education programmes. If you’re not familiar with the American South, Charleston is an ideal place to start – expect plenty of southern hospitality.

The social hub of this very social town is Charleston Place with its grand marble lobby and hand-blown glass chandeliers. The 441 rooms are decorated with fine tapestries, mahogany two-poster ‘rice beds’ and gilt- edged mirrors. A more intimate setting can be found at the 21-room Wentworth Mansion, the former residence of a wealthy cotton baron built in Second Empire style; the Tiffany stained-glass windows are particularly impressive.

The Restoration on King, which is actually located just off King Street in Wentworth Street is excellent and highly to be recommended particularly Suite 201 which with its two bedrooms is perfect for a family. In addition it has an outdoor ‘piazza’ which is delightful. The other 15 rooms are all suites/apartments and are extremely comfortable with spacious bathrooms. The only two issues are (1) that it’s quite pricey with some of what you’re paying for being a fully equipped kitchen which you’re unlikely to want to use and (2) it’s right next to a popular bar with an open air terrace which attracts a very noisy clientele. The piazza of Suite 201 is right in the firing line.

The idea of a B&B is often off-putting but don’t be deterred in the case of Two Meeting Street Inn, which is just by the Battery (waterfront) in the heart of the residential area. It has the feeling of a luxury private house with 9 guestrooms. The frou-frou Barbara Cartland decor and the four poster beds won’t be to everyone’s taste but it’s a charming alternative to the somewhat soulless Charleston Place and location wise can’t be better.

Best Of The Rest

For something in between, Market Pavilion, is a casually elegant 66-room hotel on a prime stretch of East Bay Street known as Restaurant Row. (It also has the advantage of having a great rooftop bar which you must visit for a perfect view of the city.)

Charleston has become something of a foodie destination so the city is awash with restaurants with highly celebrated chefs vying to win Southern cuisine awards.

There are a few no-frills spots for an authentic reasonable lunch. They don’t take reservations at Jestine’s Kitchen, but it’s worth the wait for the delicious Lowcountry cuisine; southern fried chicken, fried green tomatoes, collard greens and freshly baked corn bread (try the Coca-Cola cake for dessert). King Street, with its ritzy boutiques, is ground zero for shopping but that doesn’t stop people from getting their fingers messy at Jim ‘N Nicks, a local institution serving the city’s best barbecue. You can’t go wrong with the baby back ribs and pulled pork sandwich with yummy sides like creamed spinach and mac ‘n cheese. Finally, Poogan’s Porch and Tristan offers a good selection of seafood dishes beside the waterfront. Don’t try Fleet Landing, not only is it touristy but the food isn’t very good either.

For a city of Charleston’s size, its culinary scene is surprisingly sophisticated. The top recommendations from the point of view of being the most difficult not to say in our case impossible to get into are Fig and Husk. Fig is only open for dinner, Husk for dinner and lunch.

One of the most lauded restaurants is McCrady’s in a red-brick tavern dating from 1788. Chef Sean Brock, a Johnson & Wales graduate, whips up delicious Lowcountry fare with a twist (roasted Carolina grouper with squash and zucchini, country ham with smoked honey). Whilst touristy, McCrady’s is still frequented by locals – check out the upstairs dining room where George Washington was once feted. Nearby is Oak Steakhouse, a sexy venue in a former bank where chef/owner Brett McKee (who hails from Brooklyn, New York of all places) cooks steaks and chops to perfection. If you’re after a carnivorous experience and the Oak Steakhouse is full then
try Halls Chop House higher up on King Street which when we passed was mobbed. And don’t miss a meal at Charleston Grill where general manager Mickey Bakst will take care good of you. Take his superb suggestions for wine and dishes from executive chef Bob Waggoner’s menu – the buttermilk fried oysters and pan-seared catfish with fried shrimp and grits are two local favourites. Be warned it is incredibly formal though. If you’d like to listen to live jazz while you eat, then head to High Cotton restaurant for typical Lowcountry classics. Alternatively, SNOB (Slightly North of Broad), also favoured by the locals, is next door so we suggest looking at the menus online and seeing which one suits.

Best Nights On The Town

Charleston isn’t known for all-night debauchery but you can still have a good time (though the bar clientele tends to the young side). The hotspot of the moment is Social a wine and small plates bar owned by Brad Ball, the 26-year- old son of the owners of Poogan’s Porch restaurant, who learned his trade by working as a sommelier in New York’s Aquavit restaurant. Another option is the rooftop bar at the Market Pavilion, which has incredible views of the city and its many steepled churches and, directly across the street, the stately marble-stepped U.S. Custom House. In the distance is the Arthur Ravenel Jr Bridge, a strikingly modern bridge spanning the Cooper River that opened a few years ago. There are all ages here, so even if you aren’t a twentysomething in a jeans skirt and chunky shoes you’ll feel comfortable.

And if you want a dive bar, there’s always a buzz at the Blind Tiger (38 Broad Street; +1 843 577 0088), a former speakeasy. Groove to the live bands, have a beer on the small deck out back and get to know the locals – after the restaurants close, the chefs and staff usually stop by for a nightcap.

The rum-based Planter’s Punch has always been a favourite, but lately everyone has been going mad for sweet-tea vodka made by Firefly Vodka, a local distiller. Try a glass at the Vendue Inn, a rooftop bar in the historic district.

The fourth-floor pool and spa at Charleston Place (see above) should do the trick – try their signature facial. It will also be a welcome respite from the often-stifling South Carolina heat.

Charleston is one of the most beautiful cities in the world and, which is relatively uniquely in great cities, the most fascinating part of the city to explore is the residential district south of Broad Street. So just wander down King Street and explore all the streets leading down to the Battery (the waterfront). And don’t miss alleys such as Longitude Lane or smaller streets like Church Street. And when you’ve marvelled at the beauty of the houses and their state of preservation, wander again at nighttime when some of the houses are gaslit. It’s extraordinarily beautiful.

Aside from wandering around the residential district do explore the three main streets running north of Broad Street i.e King Street, Meeting Street and East Bay Street ( the restaurant strip.) and the cross streets such as Broad Street and Market Street. They are fascinating to walk around.

(Trust us you’ll be checking out house prices on the Carriage Properties website.)

Best Of The Rest

Family-owned Bob Ellis Shoes is the place for haute footwear. They have the world’s top brands (Manolo Blahnik, Jimmy Choo, Bruno Magli, Salvatore Ferragamo), and fashionistas may be interested to know that Jeffery Kalinsky of Jeffrey in New York and Atlanta is the son of the founder of the store. The jewel-encrusted evening bags favoured by Sharon Stone and Kim Catrall can be scooped up at the flagship Mary Norton. The best place for souvenirs is the four-block-long Old City Market where you can find for everything from bags of boiled peanuts to sweetgrass baskets made by local Gullah women.

The best way to see the historic district is on a horse-drawn carriage tour. As you clip-clop down cobbled lanes you can sneak a peak into the old mansions’ blooming gardens and their shady side porches called ‘piazzas’; the grandest homes are on the Battery overlooking the Ashley River. And no trip to Charleston is complete without a visit to a former plantation such as Middleton Place on the banks of the Ashley (30 minutes from downtown). Though the 18th-century house was almost entirely destroyed in the Civil War (one wing is still intact), the 60-acre formal gardens survived. Keep the camera ready for stunning displays of camellias, azaleas, magnolias and moss- draped live oaks. Nearby is Drayton Hall a Georgian Palladian mansion with an imposing white portico that dates from 1738 and is now a National Trust Historic Site. Though the house is not furnished, architectural buffs will marvel at the superior craftsmanship. Ask your hotel concierge to arrange tickets.

Linda Wohlfeil and her staff at Absolutely Charleston know the city like nobody’s business; if you book a tour with them, you’re in good hands.

The city really comes alive each spring during Spoleto, the 17-day music and arts festival which usually happens end of May/ beginning of June. At around the same time, Piccolo Spoleto offers an edgier programme of concerts and performances.

Don’t rush. One, it’s not how southern people of style and breeding behave. Two, this is the South, remember, so it can be hot, humid and exhausting. We all have our personal methods and rituals for coping with heat – be prepared.

The classic Gone with the Wind by Margaret Mitchell, Charleston by Susan Sully, The Slave Trade by Hugh Thomas and Battle Cry of Freedom: The Civil War Era by James M. McPherson.

Gone with the wind by Victor Fleming.

The temptation to try out your ‘perfect’ southern drawl. No matter how many southern movies you’ve seen, no matter you can quote from memory the entire screenplay of Gone With The Wind, very few non-southerners (and almost no non-Americans) can do a convincing southern accent. They’ll read you for a tourist straight off; on a bad day it’ll be worse – they’ll read you for a Yankee. 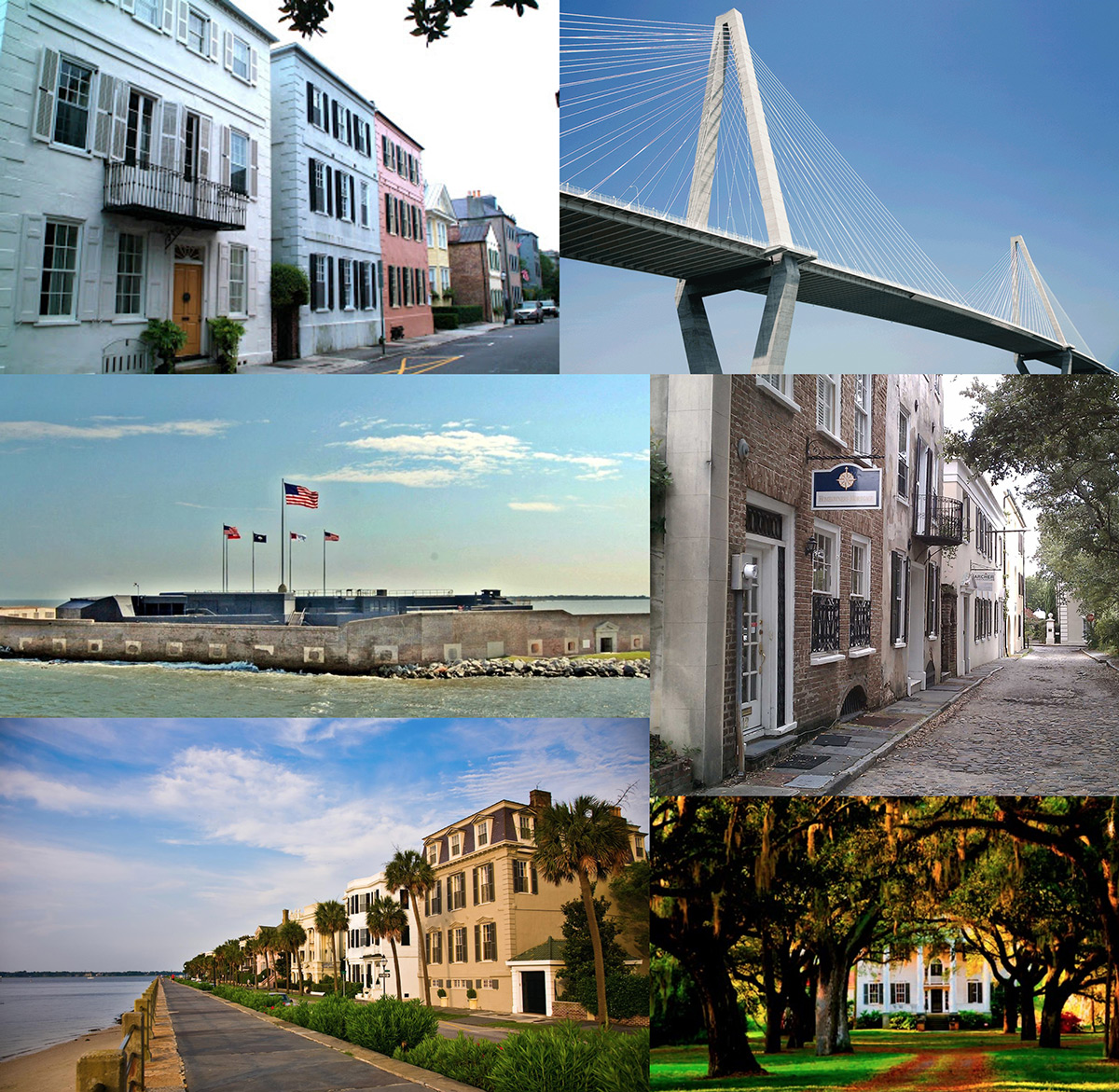 Subscribe to our newsletter to be the first to hear about the most exciting talks, debates and conferences in London and beyond

We won’t spam you and you can unsubscribe at anytime.